“CHANGES are already happening. And as business leaders, we have no choice but to adapt to these changes,” says Perdana… 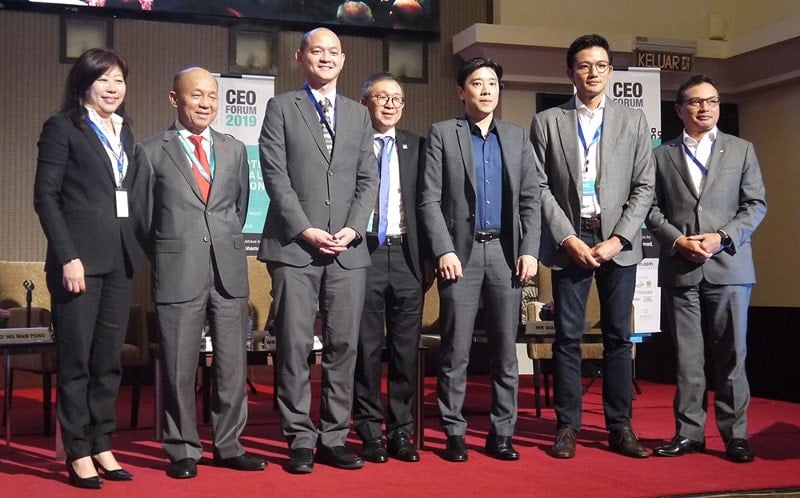 “CHANGES are already happening. And as business leaders, we have no choice but to adapt to these changes,” says Perdana Leadership Foundation (PLF) Board of Trustees chairman Azman Hashim.

This statement, which was part of his opening speech, perfectly encapsulates PLF’s CEO Forum 2019. Held on April 4, the forum is themed around the need to accelerate the Fourth Industrial Revolution (IR4.0) in Malaysia.

And the need is crucial. In the forum’s first panel discussion, titled “Understanding and Accelerating the Fourth Industrial Revolution,” the panellists stress that if Malaysia does not embrace and hasten their progress into IR4.0 – an industrial revolution marked by automation, data exchange, Internet of Things, cloud computing and artificial intelligence – they run the risk of falling behind their neighbours.

“If we do not step up to the game, you will find that we will not have just fallen behind China, but many of our neighbours like Thailand and Vietnam, who are rapidly catching up to us,” says Dr Ong Kian Ming, Deputy Minister of International and Trade Industry (MITI), who was one of the panellists.

“Our relevance in the world is at stake, and this is something that we need to get right.”

Another of the panellist, Google Malaysia’s country head Marc Woo, highlighted three key challenges that are impacting Malaysia’s foray into the fourth industrial revolution. The first is accessibility – that is, the speed of the country’s connectivity and access to the Internet and services.

The second challenge is in empowering small and medium enterprises (SMEs) – which form 98.5% of the country’s business establishments – to embrace the fourth industrial revolution and to provide them the toolsets and platform to drive it.

Lastly, Woo expresses a wish that Malaysia can produce more “unicorns”– referring to startups with valuations at US$1 billion – at a higher rate. “China produces one unicorn every four days. I believe Malaysia, through harnessing the power of Asean, could produce multiple unicorns in a year,” he says.

Panelist Ng Wan Peng, who is COO of Malaysia Digital Economy Corporation (MDEC), notes another priority to address: Talent. “For Malaysia to really take advantage of IR4.0, we need to have people trained as a user as well as at the developer level,” she says.

“If you are not aware of what Industrial Revolution 4.0 is about and how it impacts your work, your business will not be able to take full advantage of it.”

Fusionex International’s founder and managing director Ivan Teh, the final panellist of the session, says that he finds it “alarming” that most response he gets when asking SMEs about IR4.0 is “I don’t know.”

“Their [the SMEs] common response is ‘Where do I begin? What do I do?’ Some say it’s not for them – that IR4.0 it’s something for the MNCs and enterprises, and not for me. This is an extremely worrying scenario, because we’re seeing a disruption that is blurring the lines between the physical and digital world,” he says.

By sticking to this mindset, Teh says that we will see retailers shutting down, and manufacturers losing against the competition.

Addressing concerns about finding talent to foray into IR4.0, Teh says that SMEs need to look at younger people – millennials and those just entering the workforce – who he says are already built for the technology and innovations of today.

“If you give them a platform that is suitable, they will build efficiently. They are inherently born in this digital world. You don’t have to worry that they will drown,” he quips.

When asked about the fears of automation destroying jobs, Ng says that AI and robotics are said to create more jobs that they eliminate, citing a study by the World Economic Forum (WEF) that states that the robot revolution will still create 58 million net new jobs.

Woo adds that “humankind is very resilient”, pointing out that we’ve gone through multiple industrial revolutions and that we’re discovering new ways to make money, an example being YouTubers.

“I think the advent of a lot of platforms that are free to use on the supply and demand side are creating new jobs, in a way. Humankind’s resilience and creativity will keep us going.”

“People, who are undergoing education whether at school or daily, will have to change our mindset to think of what are the kinds of challenges and job opportunities in the future,” he says, adding that jobs that are in high demand today – social media managers and big data managers, for instance – did not exist 10 years ago.

“The advantage we have now is that young people today are much more in tune with digitalization trends compared to before.”

One question posed to the panellists was about the role of board members and C-level executives in accelerating IR4.0. For this, Teh notes that in his experience of working with many organisations, clear goals from the senior management is what makes their transition into IR.40 successful.

Ong adds that it’s important for organisation boards and executives to have a timeline and schedule for their digitalisation, which allows them to transition smoothly and successfully.

In order for the country to hasten into IR4.0, Ong says that imperative that organisations and businesses listen to young people, who have the better understanding and knowledge in this new frontier.

Teh, through a series of anecdotes revolving around the “Hare and the Tortoise” folklore, says that our success into IR4.0 isn’t merely to win the race in a slow and steady manner, but also “fast and steady” and, most importantly, with collaboration.

“Don’t look at your neighbours as competitors. If you can find a way to collaborate – to work with the government, to work with your friends, partners and community, with your neighours –that is how we create opportunities, break barriers and boundaries, and find progress,” he says.