Change is on the agenda for both the country and companies alike, whether it is turning one’s company into a… 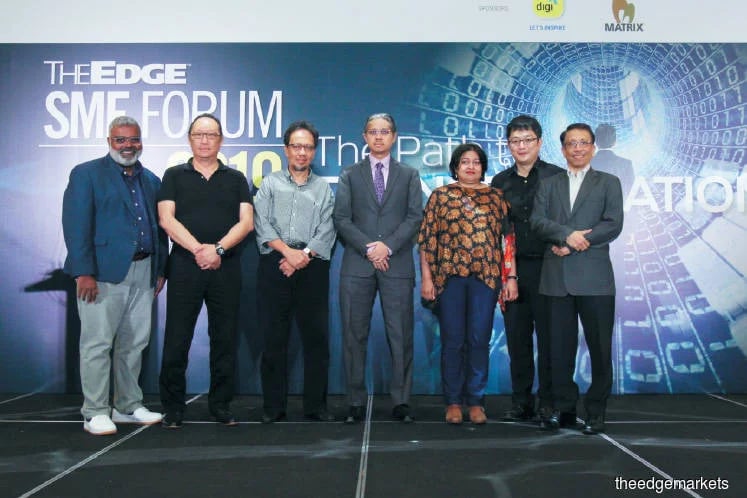 Change is on the agenda for both the country and companies alike, whether it is turning one’s company into a purpose-driven organisation, keeping up with the Joneses in terms of technology or hitching a company’s star to a particular ecosystem.

The Edge Malaysia editor-in-chief Azam Aris, in his opening speech at The Edge SME Forum 2019, pointed out that the only constant today is change and companies need to get with the programme.

The forum was themed “The Path to Transformation”.

This was The Edge’s fifth SME Forum. The first, held in 2015, looked at challenges faced by small and medium enterprises (SMEs) at the time, including the introduction of the goods and services tax and the difficulty in getting financing while the second focused on IoT (Internet of things).

The third forum delved into opportunities and challenges brought about by Industry 4.0 and the fourth, held last year, focused on the circular economy, which is both a US$4.5 trillion (RM18.72 trillion) opportunity as well as a key feature of sustainable development.

Transformation on a budget

Transformation on a shoestring budget is possible, according to Firdaus Abdullah, chief executive officer and executive director of SilTerra Malaysia Sdn Bhd, who kicked off the forum with a presentation of that title.

SilTerra, Malaysia’s only wholly locally-owned wafer foundry, was incurring losses for several years. Even after it turned a profit several years ago, it still has to work on a limited budget.

This forced the company to pivot from the direction where major global foundries were heading towards, which was to create smaller and finer wafers.

“To go down that path, [the cost] was about US$1 billion. We didn’t have that kind of money, as we are an SME ourselves, given the amount [of funds] we could deploy. So we had to move sideways and look at application areas where the chips we make can stay relevant for the next five to 15 years,” Firdaus said.

This meant going into the power sector, microelectromechanical systems, photonics and life sciences. Now, the company works with clients from China, Taiwan, the US and other countries to produce an array of high-tech products. In addition, a company from China enlisted SilTerra to help build a wafer fabrication plant past year so it could reduce its reliance on chip imports.

However, Firdaus pointed out, Malaysian companies are not making use of its facilities. In fact, 99% of its business is with foreign companies. He hopes that Malaysian companies look to see what the local foundry can offer and work together with it to create innovative products that are connected, autonomous and intelligent.

Tan Teong Khin, president and managing director of Clarion (M) Sdn Bhd, called on Malaysian companies to embrace the software component of transformation. He pointed out that 50 years of transformation had been crammed into the past five years and most of the disruption came in the form of software.

“All the devices that we will be coming across every day will be 95% software-controlled in the next five years. The car stereo, for example, used to be completely mechanical — you will need to wind it to get the correct frequency. Today, most car radios are software-defined,” said Tan in his presentation, “Transformation in the Trenches: A Practical Viewpoint”.

It is vital for business owners to understand how software could benefit them before being left behind, said Tan. In many cases, deploying software could significantly improve their services or product offerings. He gave the example of car indicators, which used to be powered by a wire and three lightbulbs — one in front, one below the mirror and one at the back. These bulbs will flash in a sequence when the indicator is used.

“The car tomorrow that we are designing today runs on ethernet and time-sensitive networking. When the driver turns on the signal, the central computer will tell processor one to indicate, followed by processor two and three. That means all of them are powered and controlled separately.

“It sounded really unnecessary and complicated, but it saves 40kg of copper wire per car, and weight is [fuel] consumption. Before this, indicators only involved one wire and three bulbs. Now it is all software, plus 12 computers,” said Tan.

A US$136 billion potential return from digital transformation

The effective implementation of artificial intelligence (AI) and big data is crucial to Malaysia’s digital transformation initiatives, which could result in a potential return of US$136 billion, said Raju Chellam, vice-president of new technologies at Fusionex International plc.

In his presentation titled, “Digital Transformation: What’s next for Malaysia?”, Raju pointed out that the use of smart analytical technology could elevate the country’s inherent strengths, which are competitive labour, infrastructure and diverse cultural history, among others.

“AI has great potential especially in areas which are fuzzy. For example, in cases of travel where a lot of things can go wrong such as, say you’re in Hong Kong and you need to board a flight but as you were caught in traffic due to the ongoing protest, you couldn’t reach the airport in time.

“How will you then reroute your flights, hotel bookings and all your appointments? This is where the AI engine can work. Your secretary, no matter how smart [she is], is not smarter than the machine and she will not be able to make appointments or clean up appointments on the fly, but AI can,” he said.

The crunching of big data, which Raju likened to “brute force computing”, on the hand, is key to writing efficient algorithm. AI uses algorithms to infer data efficiently.

But like it is with all technology, moving on to a digitalised economy has its own set of challenges, he added. The most prominent one is cybersecurity.

According to the World Economic Forum’s Global Risks Report 2018, cyberattacks were the third-largest threat facing the world, after natural disasters and extreme weathers.

“The Malaysian government has identified 10 critical infrastructures and an attack on any one of them could put the nation in great trouble. Nature attacks are localised, for example, if there is a flood or earthquake, the attack is confined to a specific geography. But if there is a cyberattack you never know who will be targeted,” he said.

Eugene Teh, chief business officer of Digi Telecommunications Sdn Bhd, said the up-and-coming 5G technology has been forcing some of the world’s oldest and biggest brands to innovate their products and services.

For instance, National Geographic that published its first magazine in 1888 has incorporated the virtual reality technology in one of its documentary programmes to engage with viewers differently. Other popular applications include the augmented reality that superimposes a computer-generated image on a user’s view of the real world and AI.

However, Teh said local businesses should adopt a practical approach to 5G and the technologies it enables, rather than avoiding it or hopping on the bandwagon immediately. Instead, he suggested, they should find simpler and cheaper ways to take advantage of it.

For instance, e-commerce retailers do not need to employ the full virtual reality technology to showcase their products online. However, they can move towards the direction of immersive experience by using existing equipment and methods.

“Some people are doing live-streaming to showcase their dresses and products. That’s one way of doing it. And I think it wouldn’t be too hard to find out other simple ways to produce a more immersive experience. You could probably buy a 360-degree camera, take some shots and feedback, and that could be sufficient,” he said.

Moving forward, the augmented reality and AI technologies could, for instance, help companies solve many other problems such as organising a meeting more efficiently with people across different continents and conducting highway maintenance works, said Teh.

The last speaker, Raymond Miranda, founder of Labora[s]tory Sdn Bhd, shared with participants about finding human-centric stories in their businesses, and reminded them to always keep people at the forefront of their solutions.

A central tenet of running a business is being able to seek out problems and find the corresponding solutions. But too often, he said, young entrepreneurs get so excited about the prospect of developing technologies and ideas to improve connectivity, without ever considering if it is facilitating any actual connections. “Connectivity does not mean connection,” Miranda reminded the crowd.

People tend to assume that both concepts are interchangeable, when in fact, “connectivity” is more akin to chaos. “We have for the longest time misinterpreted the world ‘connectivity’. We think it brings us together, but actually, what it does is show us all the options and possibilities that exist around us, and we end up feeling compelled to choose from all these options.”

He also challenged what he saw as the prevailing “Silicon Valley start-up model”. Silicon Valley has mastered the art of problem solving and finding solutions, he said. However, the model places a heavy premium on so-called “scalability” — that is, being able to quickly grow a solution or product into an all-conquering global phenomenon. The downside, Miranda contended, is the very high failure rate of these young businesses and founders, and the huge investment sums that also go up in smoke.